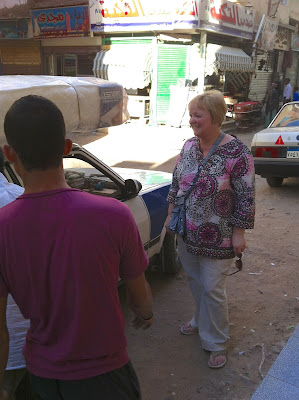 A couple days ago, John hailed a taxi and so began our relationship with Sadik*.  Sadik's appearance matched his taxi…older, weather-worn and missing a few parts (teeth and air conditioning respectively).  He was a friendly sort and willingly drove us all around town trying to locate the items on our list.  On that day, we hit about 25% success rate due to the flexible hours during Ramadan which are:

Now John and I very much want to integrate with the culture as much as we can, but with the current political conditions we've been advised to not venture out too much without the escort of an Egyptian friend.  Good wisdom, but I HAVE A TO-DO LIST!!!!!!

Now that you've seen that ugly side of me, I'll proceed with our helpful taxi driver, Sadik.  John called Sadik again and asked him to pick us up for another day of errands.  He told us he would be there in 30 minutes and much to our happiness…it was actually 30 minutes.  He greeted us with a big, gummy grin and asked where we wanted to go today.

Our first stop was going to be the mattress store.  (Actually this would be our 3rd try, but first stop on this particular day.)  He honked his way through the few pedestrians until we pulled up to the front of Taki Mattresses.  (Yes, this made me laugh, but they're the only game in town.)  The lights were on.  Yessssssss!

We walked in and found one lone employee with his head on the desk asleep.  He woke up when we entered and quickly shook himself to duty.  John introduced himself and began relaying our request for a mattress.  (We actually need 4, but we thought we'd start out with 1 to see how it goes.)

Much talk passed about size, thickness, coil count and month of use.  Month of use?  What is that?  We discovered that because our location is so very hot, that the manufacturers have taken to creating mattresses with a different kind of material that won't absorb so much heat.  The other side is for the "winter" months when it drops to a chilly 80 degrees.

We debated between the "Four Seasons" and the "White Golden" only until we discovered they didn't actually have a "Four Seasons" in stock.  That pretty much made our decision for us.  One "White Golden" mattress, please.  John asked if they could deliver and the employee suggested we attach it to the top of the taxi.  However, another employee had arrived and assured John that they would indeed be happy to deliver.

Sadik had waited patiently through all of this, but stuck his head in to see if we needed anything.  John nodded and asked him to relay to the employee our home address (since there are no numbers, streets or anything of the sort).  We paid our bill, took a receipt and proceeded to the next shop.

We still have contact with some of our friends in S*dan which is great, but does eat through our phone minutes quickly.  We told Sadik we needed to "top up" our phones with credit.  He drove us by Mobinil which was closed.  He asked around and found out that they would open at 8:30 pm.  I looked at the time.  It was 4:00 pm.  No go.

The next stop was for cleaning supplies.  I showed Sadik my picture of cleaning goods to which he quickly zipped around a corner to a man who had it all.  I picked up all the needed items and asked the store owner how much the total was.  He told me when Sadik stepped in.  He asked the man to tell him the price of each item.  Sadik did the math and gave me the nod.  I made my purchases and began a happy dance.  I was now the proud owner of a mop, a broom AND 2 buckets.  Yessirree, things are looking up.

Our last stop was going to be the subermarket, but they were just locking the doors when we pulled up.  Sadik asked what we needed.  I said, "Soap, laundry detergent and Diet Coke."  He drove (quite quickly) through the small streets to a small dukon (7-11ish).  A teenage boy asked what I needed.  I requested Coca Light and laundry soap.  Sadik stood next to me and reminded me that I also needed hand soap.  I cracked up and thanked him.

They had everything I needed with the exception of Coca Light or Bebsi Diet. I told Sadik that I was happy and we could go home now.  However, he suggested to John that we go back to get the mattress.  He had a rope in his car and could tie it on top.  John shrugged and said, "Sure, why not?"  So back we went.

We secured the mattress and told Sadik we were finished.  He said, "But you don't have Coca Light?"  I told him it was no problem and we could look another day.  He said, "We will look!"

As we drove from the mattress store toward our apartment, Sadik slowed at every dukon checking for my beverage.  A couple times he thought he saw it and I hopped out.  False alarm.

He was determined even though the afternoon was waning and the shops were all closing in preparation for iftar.  We were ready to turn a corner when I spotted a cooler with Bebsi Diet.  I jumped out and purchased a few bottles.  Sadik was once again by my side making sure that I was paying a fair price.

When I returned to the car he smiled and said, "Now you are finished!"  Yes, today we were finished.    3 things on our list accomplished.  In this part of the world, it's simply miraculous.  Thank you, Sadik, and thank you, Jesus, for sending friends our way.

*Not his real name 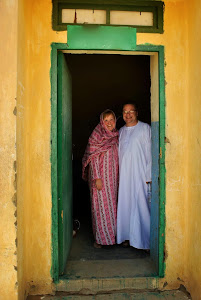